Ever since our trip to England and Ireland back in 2007, both Britt and I have become mildly addicted to tea. While visiting we had tea up near five times a day, and by the time we were headed back to the States we had a small stash of 300 tea-bags to take back with us. Now, we aren’t to the point where we can’t function, or we get the shakes without a fix of tea, but it is our drink of choice. Since then we have started a collection of teas from around the world, and always try the local tea from the countries we visit.

Rather than just go to a market and buy some Darjeeling or Chai tea (both are Indian teas) we decided to try out India’s best tea with a bit of flair, so we headed to High Tea at the Imperial.

Talk about pomp and grandeur! Before we could pull in to the parking lot of the Imperial (one of India’s elite hotels) our car had to be searched and patted down inside and out. Then we were dropped off at the entrance where you’re greeted by a team of hotel staff and this…

After going through a metal detector and having our bags searched we found ourselves in one of the most over-the-top and lavish hotel lobbies that we’ve ever set foot in. There was a strong smell of perfume, but after a look around we discovered that it was the aroma of (what seemed like) a million tropical flowers on display. We discretely picked our jaws up off of the floor and made our way to the Atrium. 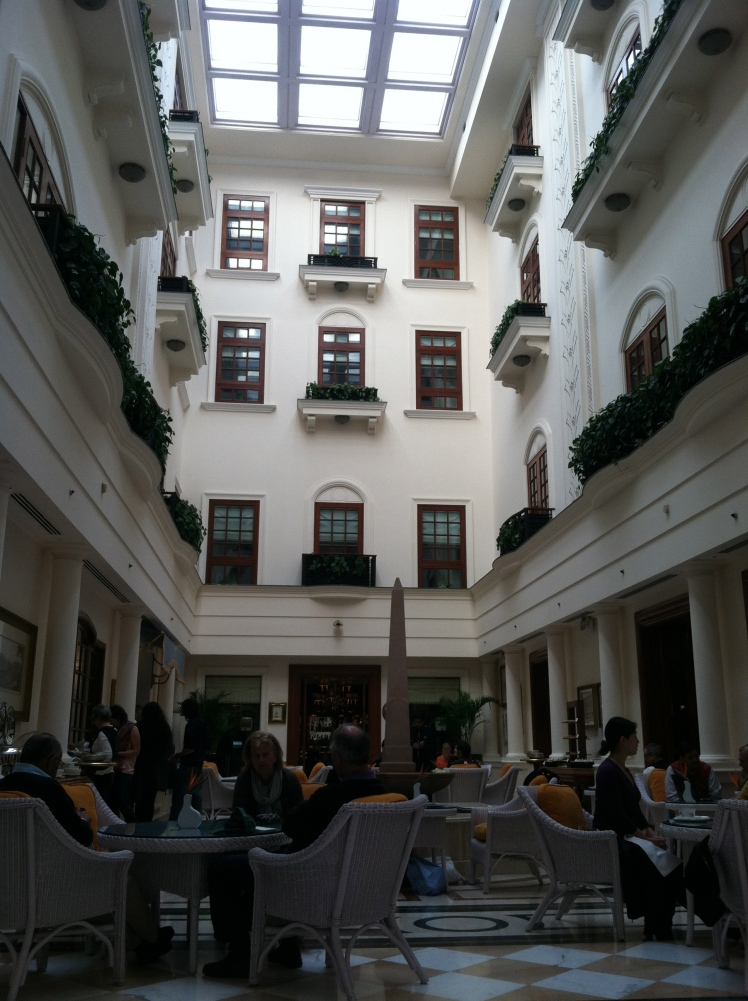 High tea is a ritual at the Imperial, and we were eager to participate! We were seated at a table that had a single bird of paradise as the centerpiece and were waited on hand and foot for the next two hours. There was a buffet of lunch delicacies, ranging from curry puffs to veggie sandwiches on croissants, but the pastry table was much more exciting! Fruit pastries, cream puffs, cookies, tiramisu with gold on top etc. etc.

The best part of the afternoon, however, was the tea (and the butlers that came with it). We chose to indulge ourselves with Darjeeling, a tea that comes from Darjeeling, India in the Eastern part of the country. We have had some nice Darjeeling in the past, but this tea was unlike any other we have ever tasted! It was so smooth and full of flavor, delicious! There was a team of waiters/butlers who stood around watching everyone sip their tea, and the moment anyone came close to emptying their cup they were there to top it off. An afternoon with unlimited pastries and tea while hanging out in a posh hotel … doesn’t get much better than that!