Over the past several years, Britt and I have used many travel guide books and have found Lonely Planet to be our favorite. Their books are always up-to-date, include great maps as well as pictures. One of the other benefits (and Britt’s favorite thing about them) is that they don’t just cover the “tourist-y” things to do, but they take you off of the beaten path and give you cultural things to do as well. Now, the problem with Lonely Planet, is that they don’t just take you around the corner off the main road, no, take you WAY off of the beaten path.

For my birthday Britt wanted to take me to Lonely Planet’s “top choice” restaurant in Delhi, called Gunpowder. Our reservation was for 7:30pm, so when our driver dropped us off in the general vicinity of the restaurant it was well after dark. We had some time to spare so we mingled through some craft stores before Britt led me down the most shady looking alley that I have ever seen in my life (and I’ve seen some shady places!). “Wait! Where are we going?” I asked with a just a hint of hesitation in my voice. “Trust me, this is the way to Gunpowder.” And so we left bustling streets of the market behind and made our way through a maze of dark alley-ways that got more and more slum-like the further we got in. Several times I stopped Britt and asked to turn around and get directions, because surely a top choice place in Lonely Planet would not lead us into such shady territory. The only reason we kept going was because Britt had been to Gunpowder previously with a few friends, and she insisted that this was indeed the way.

Sure enough, after what seemed like forever, the alley opened up to a pack of stray dogs in a little clearing, and after walking up 4 flights of stairs we arrived at Gunpowder. 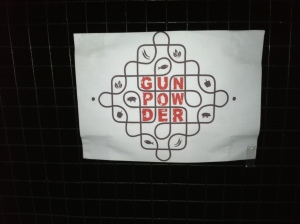 I have no idea how the good people at Lonely Planet found this place, but what amazed me even more was that the restaurant was filled with tourists all sporting their tattered and frayed Lonely Planet India books. Kudos to them for sticking it out (they all looked shaken and relived to be out of the darkness)  and making their way to this “top choice,” because if Britt had not previously been here there is no way we would have continued down that back alley even for a minute!

Britt went ahead and ordered a plethora of dishes, while the other tourists thumbed through their menus not sure what or how to order. I’m told that the food in India varies with location just as the language does, so with Gunpowder being a South-Indian restaurant we were in for a treat! It wasn’t long before our appetizer was set in front of us and we dug in. It was a salad of some sort that included coconut, coriander, onions, chickpeas and several other things that I couldn’t put my finger on. Very tasty! 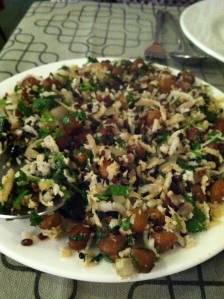 Next came our order of chili-soaked pork ribs. This was my favorite dish of the evening! 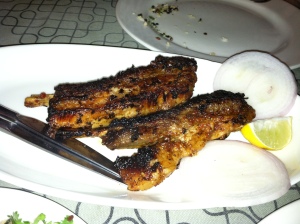 By the time our final dish of bread, pumpkin sauce and lentil sauce came around I fully understood why Gunpowder was a top choice. The food was absolutely outstanding! Each dish was an introduction to a new variety of flavors that I had never before tasted. While I sat there washing my dinner down with their homemade lime soda, I could tell by looking around that the other tourists were just as happy with their food as we were! 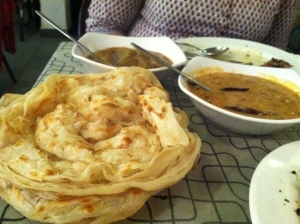 I suppose that the problem with Lonely Planet isn’t really a problem, as much as it’s a stretch of your comfort zone. While it is one thing for the writers of Lonely Planet to venture down these paths less traveled, it’s another thing entirely for us, two younger white females to follow in their footsteps. We pride ourselves in being open-minded and flexible when in a foreign country, but one of these days as we face another dark alley we may have to draw the line and stick to the main road. Until then, we will continue to explore India with Lonely Planet as our guide.

3 thoughts on “Gunpowder & the problem with Lonely Planet”