My childhood friend and neighbor, Mr. Rogers, is quoted saying the following … “When I was a boy and I would see scary things in the news, my mother would say to me, ‘Look for the helpers. You will always find people who are helping.'” 50 years ago today a frightening scene unfolded in Dallas, Texas, the assassination of President John Fitzpatrick Kennedy. While I wasn’t around back then to look for the helpers, there are still a group of them at the scene of the crime to this day. A few weeks ago I took a mini-road trip up to Dallas and visited the Sixth Floor Museum. 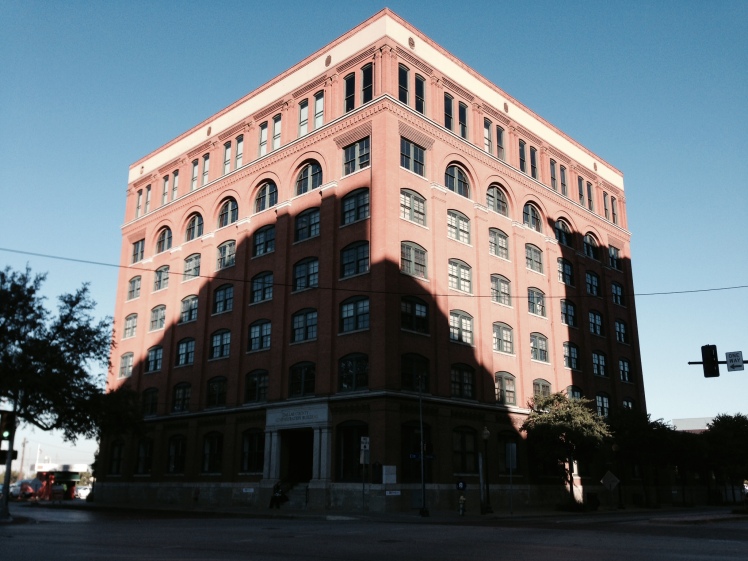 On November 22, 1963 Lee Harvey Oswald hid out on the sixth floor of the Texas School Book Depository (pictured above), and waited for JFK’s motorcade to pass. It was from that building that Oswald shot, and killed the President of the United States. Since I wasn’t alive 50 years ago I don’t have a strong emotional connection to the story, and having never studied this event in school (it baffles me that we were taught all about Western Civilization, yet we never went over things like this) I wasn’t in the know about much of what happened that day. This is where the Sixth Floor Museum steps in. It was a bright summer day when we stepped in to the museum, were each given our own headsets and audio devices, went up the elevator to the sixth floor, and were taken back in time to the morning of that fateful day in November.

The audio devices correlated with a station, of which you followed the order and worked your way, minute by minute through November 22nd. The narration is done by Pierce Allman, who was the first reporter to broadcast from the Texas Book Depository that day. In addition to Allman, each station (there were 40+ in total) was equipped with photos, video footage, artifacts, and even re-created models. The largest of the recreations is the “Bird’s Nest”, a recreated scene from the crime. While we were on the sixth floor where Oswald hid out, the actual window he sat at and shot through are blocked off with glass walls. The museum has recreated the hideout, or Bird’s Nest, that Oswald built with boxes of books. If you stand at the window next to where Oswald shot out of and look down, you can see two large white X’s on Elm Street where two of the three bullets hit Kennedy.

The exhibit then takes you through what happened next. The rush to the hospital, the official telegraph giving media the news that Kennedy was dead, the video of Johnson being sword in, all the while Jackie stood as a witness still wearing her pink suit stained with her dead husband’s blood. She refused to change her clothes and is quoted as saying, “I want them to see what they have done.” You are then taken on the police hunt for Oswald, watch his murder and end with the conspiracies that surround this event. While I was making my way through what happened 50 years ago today, I was able to spot helpers from the get-go. Police were on guard all throughout the motorcade route, and when shots rang out they rushed to Jackie’s side. After the area was cleared, eye witnesses helped to track down Oswald and give an account for what happened at the Book Depository. Fast forward to today, and people are still helping. People at the Sixth Floor Museum are helping to educate others about what happened and why it was such a terrible loss, helping to teach new generations about the past so that we can learn from it and try to make the world a better place, and most of all they’re helping to remember a life cut short. The Sixth Floor Museum is by far, one of the best museums I have ever been to. I was enraptured from the first station, and my heart was pounding as I watched the shots hit Kennedy and then Oswald.