2012, like every other year I suppose, was full of ups and downs. It just seemed like all of our “down” time this past year was spent in a hospital or doctor’s office. However, if we have learned anything while traveling, it’s that we have to take the good with the bad, and that you have to prepare for the worst, and hope for the best!

Britt and I rang in the new year in Delhi standing on our apartment balcony (ever wary of rogue monkeys) watching fireworks light up the smog-filled Delhi sky and inhaling smoke from the perpetual piles of burning garbage on the streets below. Good times. A few days later I turned 25, and to celebrate we went to an Ayurvedic Spa where we stripped naked, got covered in mud and hot oil and proceeded to receive the worst thrashings in our lives. It was wonderfully awkward and violent, and definitely a birthday that I can’t seem to forget. Eight months later we celebrated Britt’s 23rd birthday, and rather than humiliation and pain, I opted to take her kayaking down the Chicago River. Much easier on the body, and we got to remain clothed the entire time!

Though we only spent time in one foreign country in 2012 (albeit a several month-long stay) we managed to visit 10 US states, 6 of which we had never been to before. We were also lucky enough to visit 3 hospitals that we had never taken the time to call upon before. The first was the most frightening, Max Hospital in Delhi. Thanks to a faulty filter system, we both ended up admitted to Max with severe cases of dysentery. Second, was the new hospital in my hometown. Weeks after I got out of India (Britt stayed for an additional 2 months beyond my time there) I managed to break my right arm while riding (or more like falling) on my bicycle. The third hospital was Houston’s downtown medical center. This time, thank goodness, we were not the cause for concern. Our friend fainted and managed to break her fall to the pavement with her face. In-between those hospital visits were countless trips to doctor’s offices, whether it was to the chiropractor for whiplash from India or the minute clinic for influenza. Having gone for several years without having seen the inside of a hospital or doctor’s office aside from annual check-ups, we spent an inordinate amount of 2012 seeking medical attention.

Back to happy times. Because Britt did excellent work while in India, she received a promotion which led us to Houston, Texas. Ever since we packed up our apartment for our first move to Turku, Finland 2 years ago, we have moved every 6 months. Naperville, IL to Turku, Finland. Finland to New Delhi, India. India to Yorkville, IL. Illinois to Houston, Texas. This move to Texas is the last one that will be happening for several years, and it’s kind of a nice feeling to be settled. For the past 2 years we have been living out of 2 suitcases, so it was exciting to open up our storage unit and rediscover all of the things that we had forgotten we had. While Houston doesn’t sound like the most exciting place to end up, it has turned out to be a pleasant surprise.

During the 24-hour drive back to Chicago from Houston for the holidays, Britt and I had some time to mull over our year and all that it involved. There were several moments that shone brightly this past year, but we each have our favorites. Britt’s favorite thing that we did in 2012 was the tiger safari we went on in Kanha, India. We had a excellent time at Kipling Camp, where we tracked tigers in Kanha National Park and rode Tara the elephant through the jungle, and then gave her a bath in the river. It was a trip to remember, and is easy to understand why it’s Britt’s favorite thing from 2012.

Although I enjoyed our safari, my favorite thing that we did in 2012 was bicycle down 10,000 feet from the summit of Haleakala Volcano to the sandy beaches of Maui’s coast. Despite my bike incident earlier in the year, I love riding, and nothing really compares to coasting down the side of a volcano at 47 miles per hour. Looking out over the rainbows that constantly seem to cover Maui, I experienced pure bliss. From the moment we arrived at the top of Heleakala to the time we rolled onto the beach I was sporting a smile that went from ear to ear.

While we try and keep a simple life, as far as material things go, we did end up acquiring a few new things this year. We bought our first brand-new car and got an apartment. However, the biggest investment we made last year, was the adoption of a one year-old. In fact, this post has taken me a considerably longer amount of time to write than it normally would, because Brix keeps begging me to scratch her hairy chest. Did I mention that the one year-old is a dog??

2012 was good to us, and we managed to cram a lot of things in. We learned several valuable lessons, i.e. how to pass the IKEA Test and not to trust police escorts. We hope 2012 was as exciting for you as it was for us! We’re looking forward to all that 2013 has to offer, and are eager for our first big trip in one month to Sweden! Happy 2013, and always remember…

“The world is a book, and those who don’t travel read only a page.” – St. Augustine 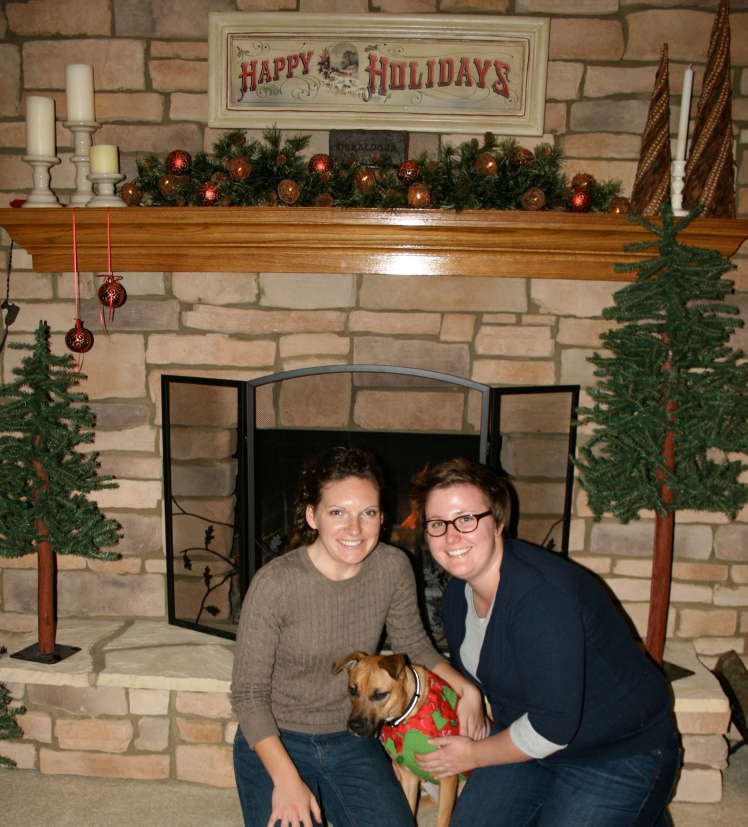