As I mentioned in an earlier post, we made a new friend while on safari. Tara, a 52 year-old Asian elephant lives at Kipling Camp, and we had the chance to spend some time with her over a bath and some tea. We met with Tara at her custom-made shelter, and climbed on her back for a rocky 30 minute trek through the jungle to the Banjar River. 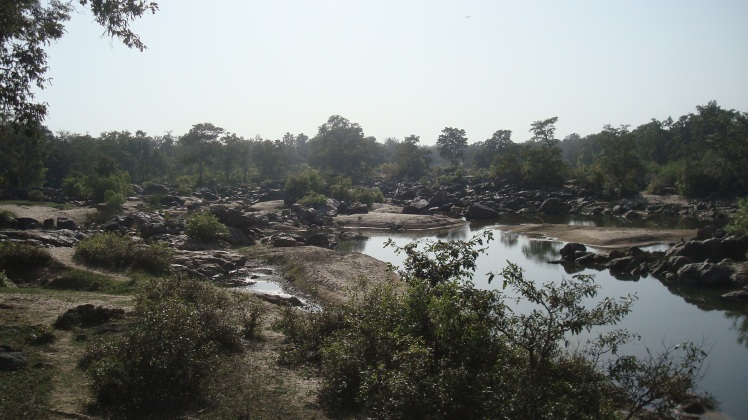 As soon as we were off of her back, Tara took off for the water and dove in head-first! Here she is after jumping in, can you spot her?? 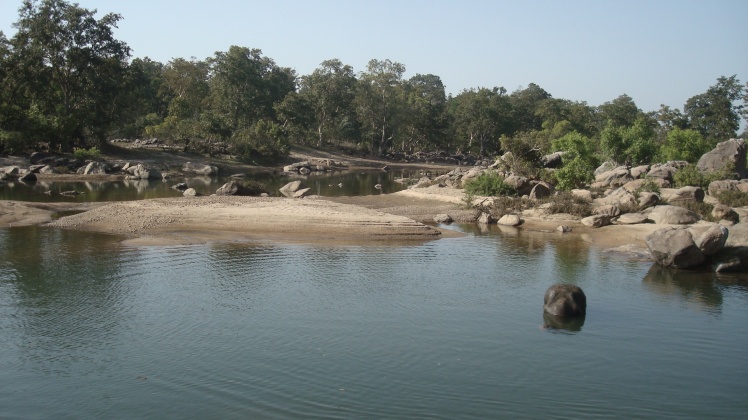 A trip to the river is part of Tara everyday schedule, and it’s her favorite thing to do. Though the temperature was only in the low 90’s (a cool day compared to the summer heat in central India), Tara spent most of her time in the water submerging as much of her body as possible. She also likes to play in the water with her mahout (trainer).

After her “play time” is over, it’s time for a scrubbing! Another part of Tara’s daily routine is getting scrubbed down with rocks, do get rid of dead skin cells. In the wild elephants rub on trees or large rocks, but life at Kipling Camp is pretty sweet!

Never in a million years did we think that one day we would be giving an elephant a bath in India! It was a blast! After we had scrubbed her from head to trunk she was in the mood to play some more. This time she focused her energy on Britt…

Now that Tara had her fun in the water, it was time for a snack. Tara made herself comfortable and munched on some vegetation, while we settled down in the sand and had tea and biscuits.

We had a few biscuits left over, and decided to share them with our new giant friend.

It was amazing how gentle and quiet Tara was, considering her size. She was so affectionate towards all of us, and she has a personality all of her own! Our time with her was the highlight of the trip, and we’ll definitely be coming back to visit her!

3 thoughts on “Tea with Tara”