Back in 2006 Britt and I crossed the Equator while on a trip to Uganda, East Africa, which sits at 0° latitude. If you go up North 66° 32 feet and 35 inches from the equator you end up on the Arctic Circle. Today, that is where we were at. Now, we just need to cross the Antarctic and Tropical Circles and we have all 5 major circles of latitude covered! 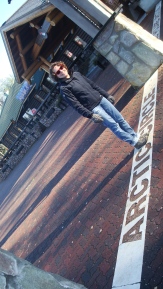 This also happens to be the home of Beardie Weirdie (aka Santa Claus, Father Christmas, etc.). Being the off season we, and a handful of Japanese tourists, were the only one’s at Santa Village. The Christmas music blared from the speakers while we hopped back and forth across the Arctic Circle, with the occasional elf strolling by. Santa can be visited at his office every day of the year, and today we just breezed through what would have been hours and hours of line waiting during the Christmas season. It was nice to be the only ones at the village, but it was also a bit creepy. Like, walking through Small World at Disney Land after hours creepy. On the way up to Santa’s office you walk through the giant innards of Santa’s clock, which on Christmas Eve slows time down so that Santa has time to visit each house. There were also pictures of Santa with various celebrities covering the walls, the only one we recognized was Conan O’Brian (he is like a golden god here!). We finally got to the top floor, where Santa was waiting with one of his elves. He talked with us about Chicago (turns out he’s a Bulls and Blackhawks fan!) and our previous 6 months in Turku.

We also were very productive today and spent some time in Santa’s post office filling out Christmas cards. We dropped them in the Christmas post, which means that they’ll be sent out in time for Christmas Eve and they’ll have the official Arctic Circle and Santa’s Post stamp!

One thought on “Beardie Weirdie”