Most good adventures begin, I have found, with the signing of a liability waiver. This little walk-about I’m about to share began with not one, but TWO of them – a sure sign of a good time! A smirk crept upon my face as I used my headlamp to skim over the general “you cannot hold us liable for your death, injury or kidnapping” jargon and gleefully scrawled my name out on all the dotted lines. It was 9:30PM, and Leah and I were about to do what, up until that moment I – and most people on the planet – actively avoid getting close to doing – bumbling about in the wild at night. Wild this was, for we were in the heart of Manuel Antonio National Park in Costa Rica, armed with headlamps and reassurances that no one dies on these hikes… usually.

Not only were Leah and I brave/unhinged enough to pay money to do this and sign away all liability, but there were 6 other adults all jittery and waiting to be terrified along with us. We were packed into a van and driven out deep into the jungle, which I’m now realizing sounds like the start of a bad horror movie – the kind where you yell at the screen, “you dummies! Don’t get in the van! NO! Don’t go into the jungle at night!! Something bad is going to happen to you!” It’s always obvious when something’s a bad idea from the safety and comfort of a theater seat or couch, alas hindsight is 20/20 and  in the heat of the moment this sounded like good fun. 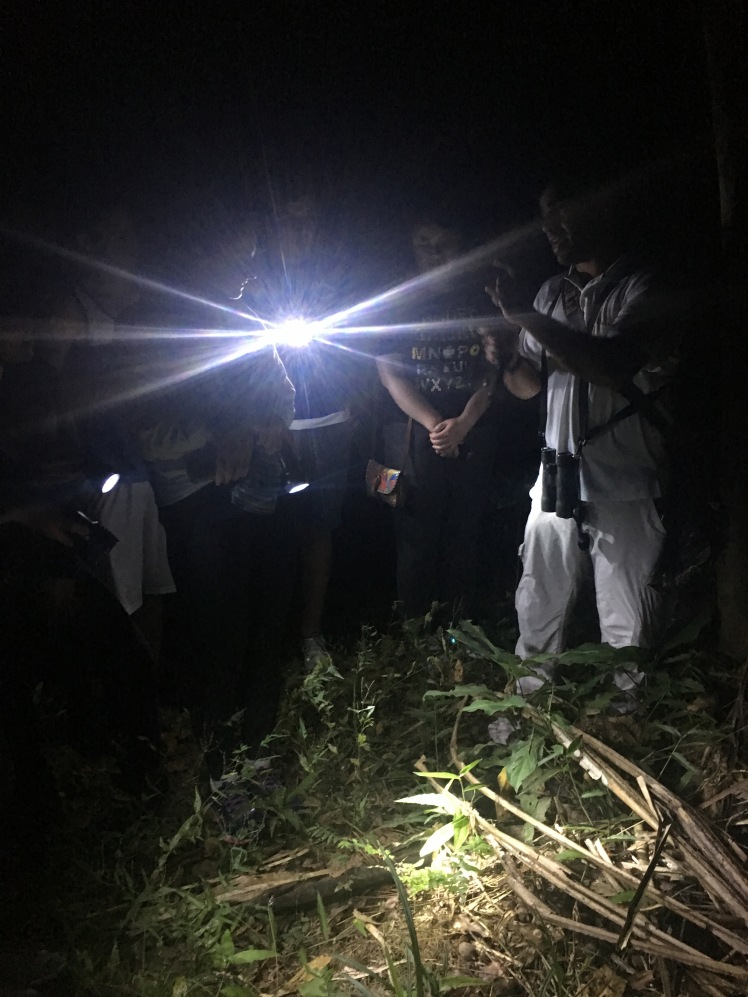 After all waivers were signed and headlamps switched on we huddled in together while the guide introduced the jungle and explained that our ‘hunt’ for most of what we were looking for would be by sound. Suddenly, mid-sentence the guide turned and darted off down some unseen path towards a lizard that hiccuped, or made some other minuscule noise that only the guide and his super-sonic jungle ears could hear. The thing about the jungle is that it’s loud. Like, the kind of loud that requires you to use your outside voice to be heard by the 7 people you were left huddled with as you watch the headlamp of the guide disappear into the darkness. All of the creatures who silently endure the daylight and heat, explode into a chorus of nearly ear-shattering sound as the moon comes up and the sane diurnals tuck into bed. We, on the other hand, collectively decided that we should probably follow the guide, and seeing as no one wanted to lead the way I stepped up and led the caravan of terrified adults into the dark unknown (imagine a group of high schoolers each with their face buried in the back of the person head of them as they stumble through a haunted house and you’ve got a pretty good image of what we looked like). Here’s a pro-tip for anyone who finds themselves in a similar situation: let someone else go first.

As I slowly shuffled my way towards the general direction in which the guide disappeared, I was relieved to hear him coming back our way. Only, he was yelling and a bit frantic. Naturally, I stopped moving and was surprised to discover that he was yelling at me. He was commanding everyone to back up but that I stay in place and NOT MOVE. He kept saying “furrdulance, furrdulance” like I knew what he was talking about, however never having heard that word before I hadn’t a clue what he was so worked up for and so remained relatively calm all the while scanning my surroundings for whatever the cause of alarm was. I saw nothing but jungle floor. Fallen leaves, sticks, and general plant related debris. The guide slowly walked to my left side and pointed his fancy and powerful flashlight at what seemed to be a pile of leaves that was less than a foot from my right foot. I kid you not, it took me a solid minute of staring at that pile of leaves to realize that it was in fact a fairly large and not too happy looking snake. Turns out, it was not just any run-of-the-mill snake but a FER-DE-LANCE VIPER (fer de lance, that’s what he was saying!). The guide and I did a slow two-step to the left as he used a cautious, but obviously thrilled, voice to explain that these snakes are the most poisonous in the Western Hemisphere and one bite, if not properly treated, can be toxic. He took my phone and got a stellar picture of her, while I stood off to the side petrified and paranoid that every pile of leaves, every stick every EVERYTHING was a jungle-disguised, lethal creature of the night waiting to make their move.

After everyone made it safely past the snake, we stayed much closer to the guide and followed him as he followed the chirps and whispers of the likes of Jesus Christ Lizards (they can walk on water), tree frogs, and Honey Bears – which are less of a bear and more of a monkey/cat type mammal that makes one helluva noise by violently shaking large palm fronds and tree branches. It’s the size of a house cat, but sounds like Godzilla on a rampage in the jungle – not a super fun noise to hear coming from behind you in the dark. 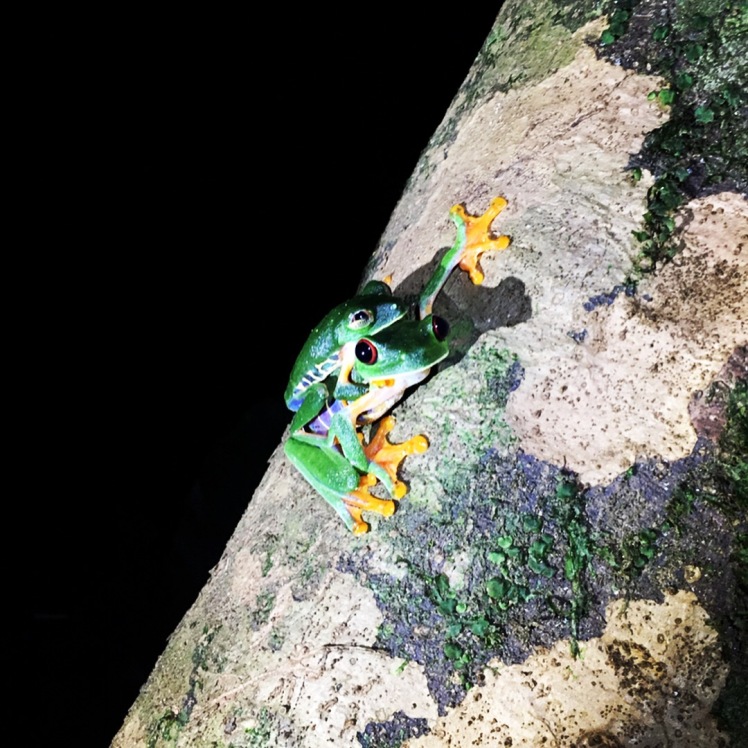 Of the creatures that didn’t make any sound and were silently waiting to attack many were spiders, and BIG ones to boot. The huntsman is a biggie that likes to hang out on trees and the underside of elephantine leaves. As we stood at the base of one such leaf (I speak to the tune of 15 feet by 8 feet) checking out this spider that hunts horses the guide asks us how we think such a small spider (what a joke, it was bigger than my hand) can hunt something as large as a horse. Most of our brains had been thoroughly terrified and our nerves shot by this time so we had little to offer, but no bother because our knowledgable guide was eager to spill the beans. These spiders don’t use webs to catch their prey, which seems rather obvious but after seeing the Golden Orb spider city I couldn’t be sure, rather they have unbelievable jumping abilities and will bite the horse on the hooves, triggering a paralysis by venom (something about the carotin being susceptible to their bite). As terrifying as that was to come face-to-face with, the tailless whip scorpion was even more unnerving to find as it’s roughly the size of a DINNER PLATE.  Turns out, there’s some pretty scary shit lurking in the dark.

The group had been chugging along quite well, when the guide led us off of the ‘path’ into a patch of trees and tall grass. He instructed us to turn our lights off and stand in the dark. The darkness that engulfed us is hard to capture in words. It was all-consuming. You could not see your hand in front of your face, let alone whatever the hell that was that just brushed against your leg! The guide then turned on a UV-A light, illuminating dozens of bright green… things on the surrounding trees.

At that moment, standing in the tall grass surrounded by trees that were overrun with glowing scorpions (turns out, all scorpions glow! The more you know!) I began to feel uneasy. Really uneasy. Funny enough, no one hesitated to lead the pack out of this nightmare which is how I ended up at the back of the pack unable to hear the guide as he forayed ahead deeper into the jungle. Do you know the feeling you get when walking alone at night and you think there’s someone behind you? So you begin to walk a bit faster, and faster until, if you’ve not got inhibitions, you break into a full sprint. Doesn’t matter if you’re walking down a city block or from the kitchen to the upstairs bathroom, and you know it’s irrational, but still you run. Welp, bringing up the back of the pack gave me that exact feeling though this time it took every ounce of self-control to not freak out and bolt not because of the fear of someONE but someTHING. Thankfully, as my panic began to rise to right near breaking point we came out into a clearing where the van that had brought us into the dark was waiting to take us back into the light and civilization. We made it out alive! You’d think I would’ve learned my lesson and stayed indoors at night, but 4 weeks later when my mom came down to visit me on the caribbean side of the country I booked a night hike and went with my mom in tow through all the terror and thrill.

What have I learned from my time in the dark? Well, we’re probably biologically wired to sleep and be unconscious for it’s duration for a good reason. Our nervous systems would be completely shot if we had to encounter the night-time creatures on a daily basis. So, take solace in knowing that the stuff of nightmares doesn’t come out to play until we’re getting ready to check-out and dream deep. On that note, sleep tight! 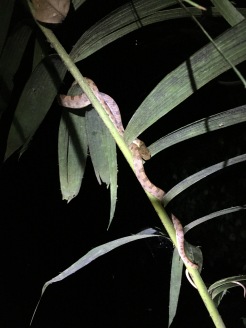 2 thoughts on “The Dark”