It was another early morning for us, as our group met in the hotel lobby at 4:15AM. We scuttled our way across town to the bus line for the Lost City, and even at such an ungodly hour, we were still beat by several hundred people to the line. There was a palpable energy among the masses, all excitedly waiting in the early morning darkness for our chance to roam one of the new Seven Wonders of the World. Unless you take the shorter Inca Trail hike that has you entering the Lost City through the Sun Gate, then you’re forced to be herded onto busses that careen and chug their way up 1300′ to Passport Control at the gates to the Lost City. With a HEFTY entrance fee of $200 we made our way onto the ancient ruins of the most well-known Incan icon.

Brought to the world stage by Hiram Bingham in 1911, this mountaintop estate – built in the 14th century – had been lying dormant and was lost to the jungle since the Spanish conquests of the 15th century. It was a highland boy who directed Bingham to the site, though back then the city could’ve easily been overlooked as the jungle had all but swallowed it whole. No one knows exactly what this was (city? estate? hide-out?) or why it was abandoned, however most agree that the Spanish Conquest led to the desertion. For simplicity’s sake, I’ll refer to it as the Lost City. 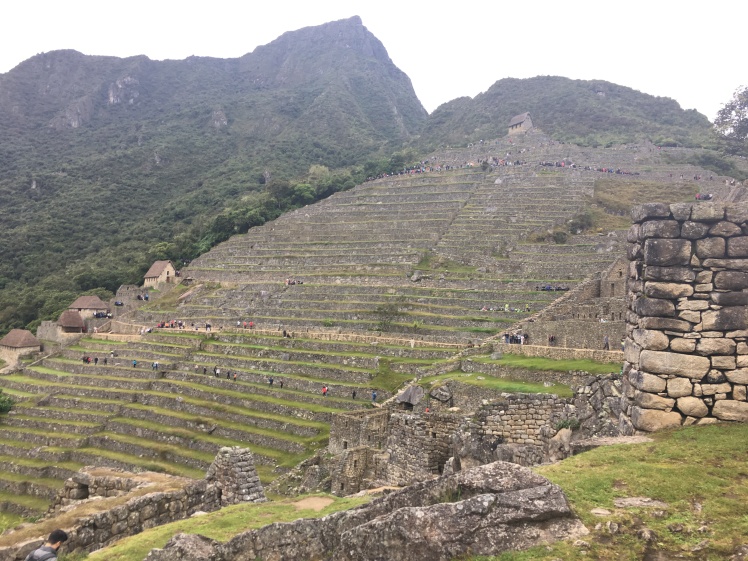 Terraces, presumably used for farming, are now the grazing grounds for lazy llamas – of which we only saw 3.  As we stood there googling at the immensity of the Lost City, I began to wonder; where the heck did all this stone come from? Turns out, there is a quarry on the backside of this particular mountain. Okay. But how the hell did they get stones of this size up and over to this side of the mountain?? Again, no one knows for sure, but theories abound; some of which involve a pulley-lever system (likely), others of which involve aliens (less likely).  Regardless of how you think they were able to maneuver these massive pieces of rock, one has to take pause when observing the mind-blowing accuracy of the stone-carvers.

Without the assistance of mortar, computerized levelers or power tools the Incas were able to masterfully construct an entire city with nothing more than their hand-forged tools. For thousands of years this city has stood tall, withstanding hundreds of earthquakes and the relentless grind of gravity. Truly awe-inspring. 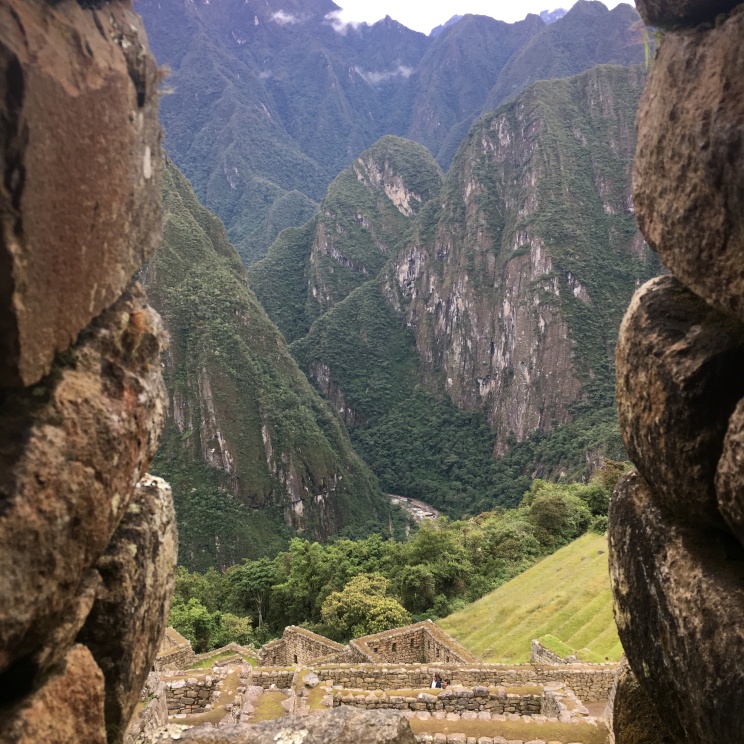 After Jose had wrapped-up his 2 hour tour of the city, he then announced that he was taking the other three hikers up to the Sun Gate, and that Leah and I were now on our own to hike Wayna Picchu. I’m still not sure why we were chosen to hike Wayna Picchu, but Jose was eager to get his group moving so we said our goodbyes and asked which way Wayna was. Dear Reader, do you see the lovely picture below? The one where we still look happy and excited to be at the Lost City? That is because we didn’t yet know what we were about to get ourselves into. Behind the happy-hikers, and the beautiful Lost City, there lies a violent mountain that spends its days threatening the heavens. That, my friend, is Wayna Picchu (translated from Qechua to Young Mountain); rumored to be one of the MOST DANGEROUS MOUNTAIN HIKES IN. THE. WORLD.

From where we were standing in this picture the ‘Young Mountain’ didn’t look so imposing, but as we went back down through the city it began to loom over us as clouds rolled over releasing a gentle drizzle – just enough to dampen the thousand year-old stone steps, making the hike near impossible.

With an assigned climbing time of 10:45AM – 1:00PM, we joined the line for yet another passport control. This time however, they were registering numbers for reasons relating to missing persons (i.e. if you don’t check out by your time then rangers will go to the bottom of the mountain to look for your body). The exit gate was one in the same with the entrance, and if the looks on the hikers faces were any indication of what lie ahead, then we were in for one helluva climb. 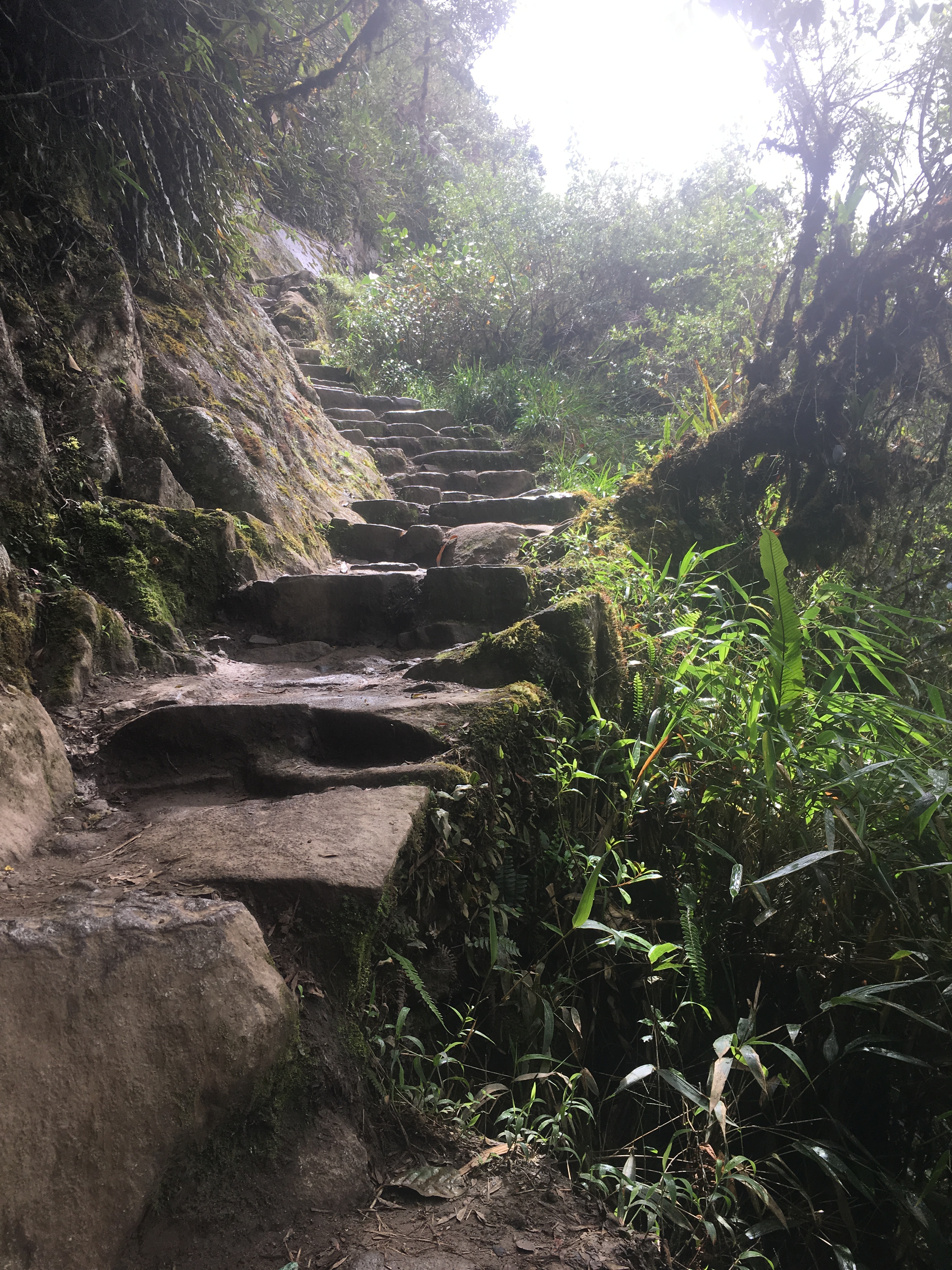 These steep, thousand year-old steps were the easy part of the hike, for they got us up and over the first ‘mini mountain’ and at the base of Wayna. With that being said, it must be noted that these steps were not in any way, shape or form easy or enjoyable. With no guard-rail of any sort one would occasionally reach out and grab the mountain to steady oneself, only this was a fun game of ‘don’t grab a tarantula’ as their nests abounded on the mountainside. The higher we went, the steeper the stairs, sharper the switchbacks and thinner the air. Not a good combination. After about 45 minutes of non-stop huffing and puffing our way up the mountain we were about halfway to the top. It was satisfying to look back down on the Lost City, as it put it into perspective and showed just how far we’d climbed. 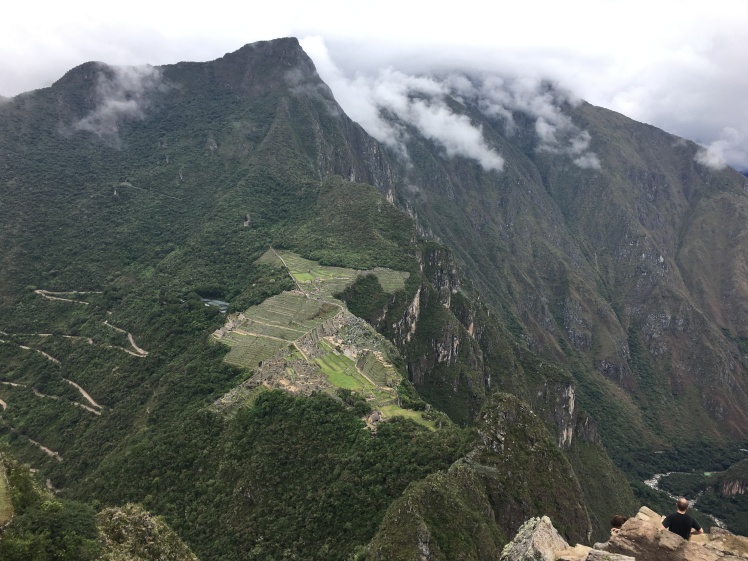 The thing about this path, aside from the sheer thousands-of-feet drop-offs we were climbing atop of, the thin air and slippery-when-wet ancient steps, was the fact that it was a two-way path. When hikers coming up met with those coming down one of the parties got to stop for a quick breather while they pressed themselves up against the mountain (again, watching out for spiders) while the other party carefully climbed around and/or over them. Not safe. Not fun.

Anger really isn’t the right word for how we felt when we finally reached the top of Wayna Picchu, but it comes close. The view was stunning, however we still had to turn around and go back down that insane path so while we knew we would never again set foot upon this sacred mountain we kept it brief. The Incas had created a small loop at the summit of the mountain which avoided passing travelers of opposite directions by routing the downward hikers through an impossibly small cave before joining the main path just shy of the summit.

The size and scale of these stairs to hell are hard to appreciate in this photo. Remember, Incas were a smaller people (much smaller if you’re a modern day american reading this), so too were their stairs and apparently their cave entrances. Here we have a full sized French man heading into the darkness:

When looking down the stairs into the cave there was nothing to be seen, so, for all we knew we could’ve been walking right into a massive tarantula nest, a bat cave or a flippig’ time-portal! We heard many grunts and rapid French chatter coming from the aforementioned hiker, but no screams for help or of pain, so we followed suit. The stairs were so steep that I had to stop and determine whether or not to go facing forward, or to turn and essentially climb down backwards. I opted to face forward, for I wanted to see what fresh new hell awaited me as I descended into an jungle cave.

The bad news is that it was indeed a cave. With a ceiling standing about 4 feet tall it required all upright passers-by to crouch their way out. Well, having just finished a 60 mile multi-mountain hike, including the blasted on we were currently on, my thighs had had enough and would not support my weight in the dignified crouch – so, I crawled. Thankfully I was shrouded in darkness, but I’m pretty sure that if anyone had seen me they would have been able to commiserate. The good news is that there were not any cave dwellers (bears, bats, large bugs, etc.), or at least they were kind enough to keep quiet while we laboriously made our way through.

After rejoining the path we started the long and slow descent down the mountain. With a trail so steep, going down was extremely hard on the knees and required complete focus on the task at hand. As I mentioned earlier, it was misty which made for slippery conditions, so our hike went from extremely dangerous to you’re probably going to die. A hike of this magnitude is life-changing. It makes you appreciate simple things like safety standards and guard rails, neither of which were present on this day.

By the time we made it back down to the Lost City our nerves and patience were shot, and we were more than ready to end our Andean trek. We maneuvered our way through throngs of loud and slow tourists just as the mist turned into a proper rain. Back down in Aguas Calientes we grabbed a quick bite of alpaca (not too shabby) and avocado (the food of the gods), and then joined a few hundred other travelers on Peru Rail to head back to Cusco.

One thought on “Salkantay Hike Day 5: The Lost City”