After running the half and full marathon on Saturday, come Sunday morning some of us fared better than others. One of us had blisters the size of Texas, a few of us had creaking joints and all of us had sore legs. Needless to say, it was slow going, especially up and down the stairs. After an all-Canadian breakfast of Tim Horton’s Timbits, Donuts and coffee we were headed for Niagara Falls.

These are the third major falls that Britt and I have had the chance to visit. Last year while visiting Hawaii we swam in and around Waimea Falls on the island of Oahu. 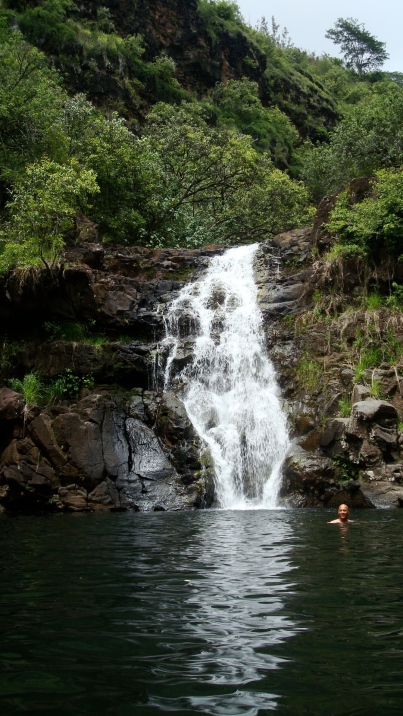 The first major fall we saw was back in 2005 on our first trip to Africa. Nestled in the lush hills of Northern Uganda are Murchison Falls. These falls seemed much more violent than Niagara and Waimea, however that may be due to the fact that there are no guard rails separating you from the violent water throwing itself over the falls.

Now, on to Niagara. There is nothing quite like standing next to one of Nature’s displays of power. It fills me with a sense of awe, wonder and connectedness to our environment. It’s an amazing feeling. I can only imagine what the first explorers felt when off in the distance they heard a roaring, and following the noise they came stumbling across what is now known as Niagara Falls.

There are three separate falls that make up Niagara, two of which belong to the United States, the other larger of the three belonging to Canada. The water flows from Lake Erie, over the falls and into Lake Ontario. Twenty percent of the world’s fresh water lies in the Great Lakes, and most of it flows over these falls. Two hydroelectric plants control the amount of water that flows over the falls, and water flow over the American falls was once stopped completely for several months to see if it was feasible to remove some of the rock-bed to enhance appearance. It wasn’t, but I think it looks beautiful just the same.

There are many ways to view the falls, and we did just about all of them. First we started with a ride on the Maid of the Mist. We were each given disposable rain ponchos, and herded onto the boat. The upper deck was jam packed, and as we were taken into the horseshoe of the Canadian falls screams of delight were offered up as torrents of mist rained down on us.

The ride was only about 15 minutes long, but it left us with soggy shoes and smiles that lasted well into the night. Next, we ventured away from the falls and down the Niagara River to the Whirlpool Rapids. Professional white-water rafters will go on runs that are level 4 or 5, and with all of the water surging down from the falls, the Whirlpool Rapids rank in at a level 6. A few people have attempted to ride these rapids, but so many people have died trying that it is now illegal.

At lunch we tried the Canadian favorite Poutine (french fries, topped with cheese curds and brown gravy). I wasn’t sure how I felt about the dish on my first bite, but soon decided I did indeed like it. 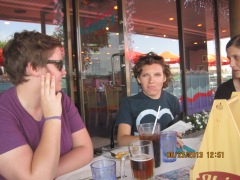 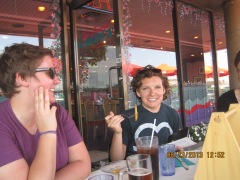 By this time we’d been in and down-stream from the falls, and now it was time to go behind them. Again, we were given ponchos, then taken down to a tunnel system that went directly behind the falls. The cool, damp tunnels led us to openings where we could catch an up-close glimpse of the water as it crashed it’s way down the falls. We were also able to view the falls up-close on a deck just a few feet from the edge of the Canadian falls.

While the rest of my group went into a 4D movie explaining how the falls were created, I sat at Table Rock and got a great view from above while sipping on some Canada Dry. Not a bad way to spend an afternoon, eh?

We had seen the falls from every which way, and no matter what angle you see them from they are nothing short of amazing. With this trip we were able to cross off two of the items on our Mondo-Beyondo List (bucket list). 1. Run a half marathon. 2. See Niagara Falls. We accomplished a lot this past weekend, and we were fortunate enough to do it all with the people we love most, family. 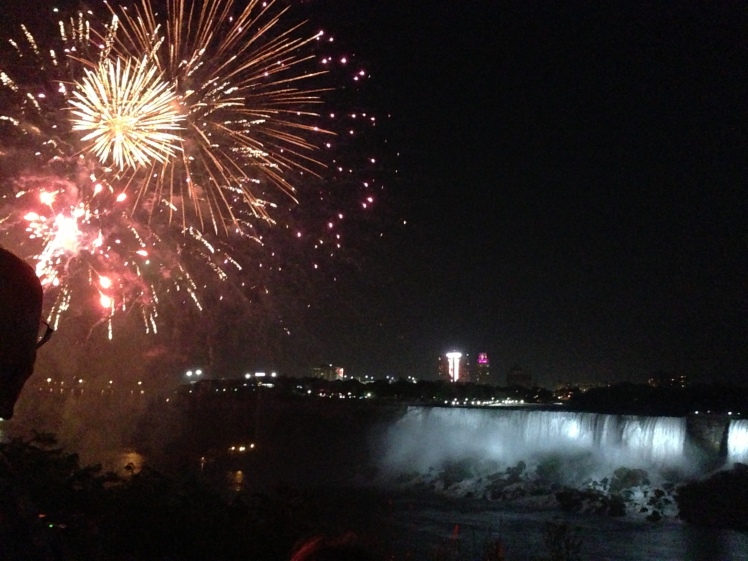 One thought on “Every Which Way”